The awning comes with the “generic” installation kit so we ordered the kit specific to the high-roof Ford Transit (which seems in fact to be for the Europeans Ford Transit, but we had it working on our new-world Transit version).

We were somewhat disappointed with the kit which only consist of 2 aluminum adapter plates and some wood screws; installed directly on the van, these plates will scratch the paint for sure (because of the mating surface) and welcome corrosion in the future.

In addition, we did not like the idea of using “wood” blocks (or equivalent) on the inside of the vehicle as suggested by the Fiamma manual (it is impractical anyway because the support surface is not flat and there are structure components too). We needed to complete the kit ourselves with the material shown below. Even with the specific installation kit, this job is not “plug-and-play” at all; there is some craftsmanship involved, but anyone could do it armed with patience and attention to details.

If we had to start over we would consider a roof rack, because installing all the accessories (maxxfan, solar panels, Fiamma awning direct-mount, etc.) would be much easier AND we would have a better access to the roof (with the permanent side ladder): 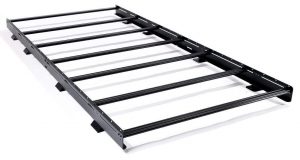 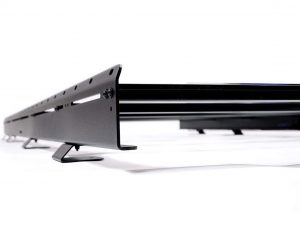 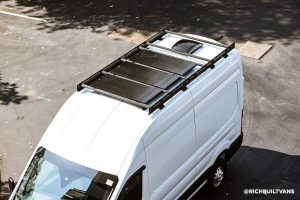 We like the Low Pro roof rack from FlatLine Van Co: it’s modular, low profile, easy to install, and affordable compared to other roof racks out there: 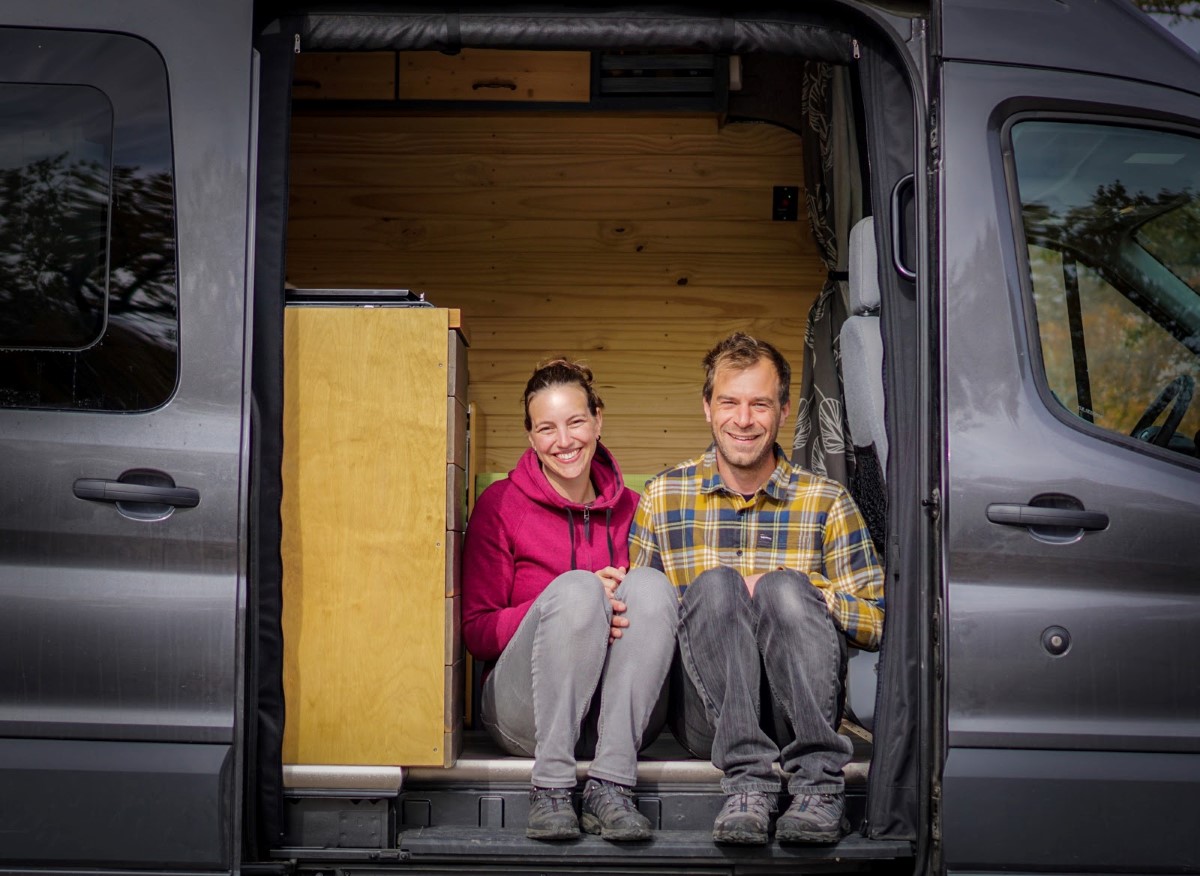 Edit 2020: There are now other high-quality alternatives to the Fiamma awning. We’d probably give it a try if we had to start over: Dometic, Thule, Carefree awnings on Campervan-HQ.com . 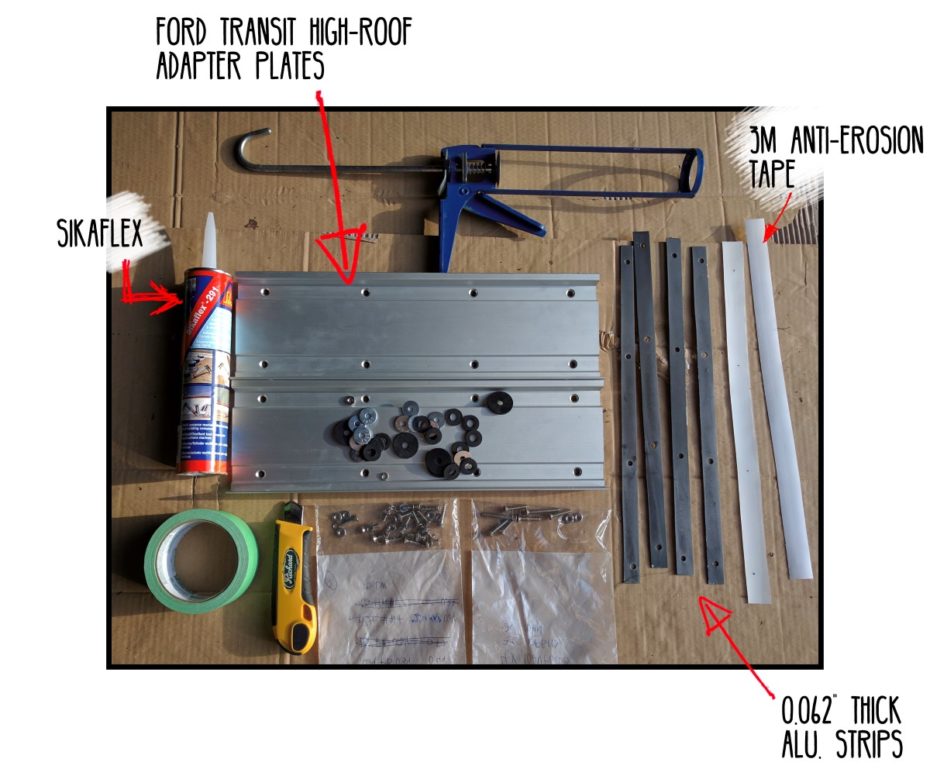 HOW WE DID IT*

*Disclaimer: we’re good, but not that much. Use these instructions at your own risks!

RULES ARE MADE TO BE FOLLOWED

First rule: The adapter plate must be located on the “Support” stickers, on the back of the awning.

Second rule: The awning must be installed “vertically” (that’s the role of the adapter plates anyway) 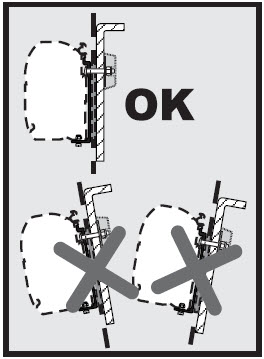 Third rule: The awning must be installed straight for the mechanism to work.

First of all, we asked a friend to come at our place to have a beer. Shortly after, we informed him of the Fourth rule: no beer until the job is done.

Then, to protect our sexy van, we applied some painter’s tape at the approximate location of the adapter plates. 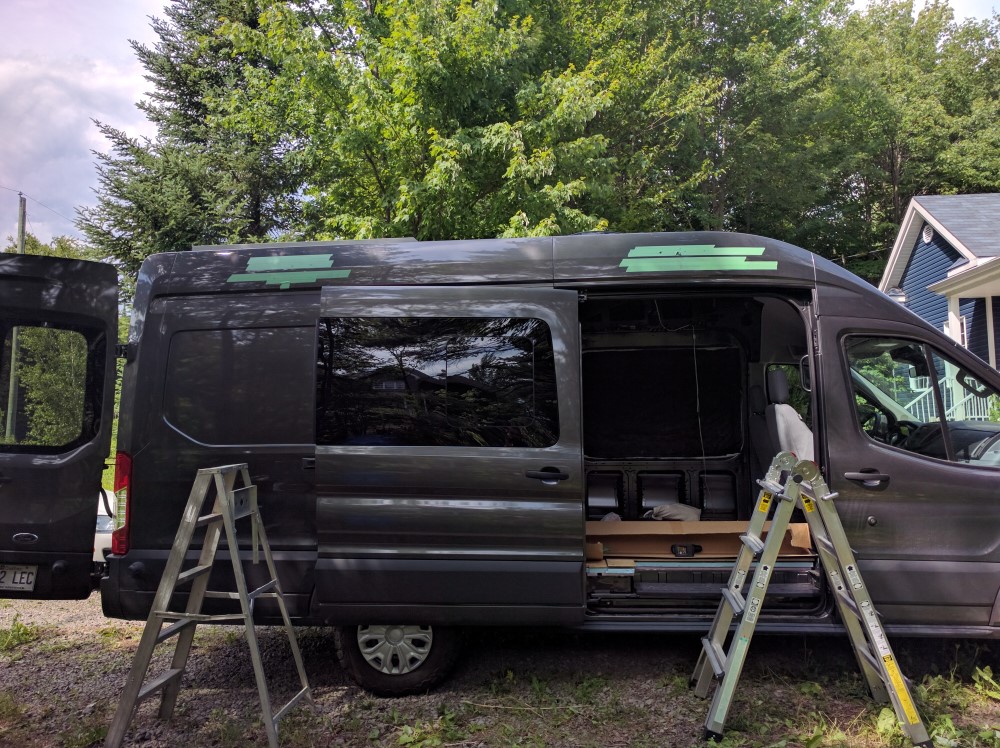 We located the adapter plates at the “support” stickers and taped them to the awning. 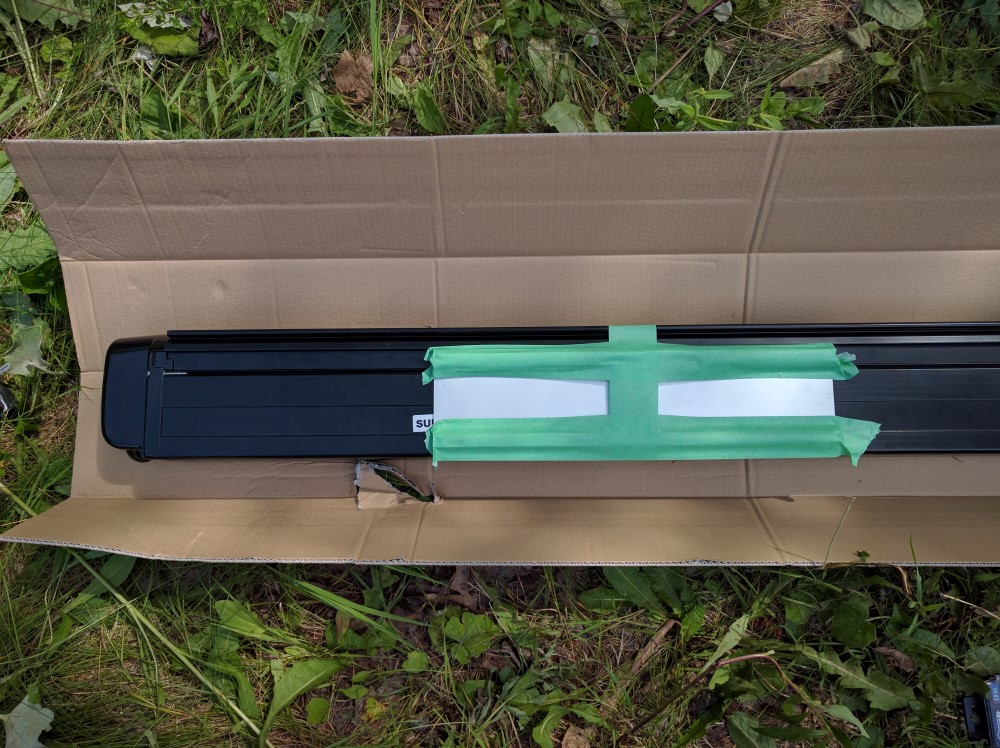 The awning should be able to clear the sliding door during deployment. We partially deployed the awning (0.75 meter), hold the awning on the van and marked the height. Then we located the forward-and-aft position of the awning. Ideally, we wanted the awning to cover the door area completely. Two persons located and held the awning in place while the third person marked the location of the adapter plates on the van. 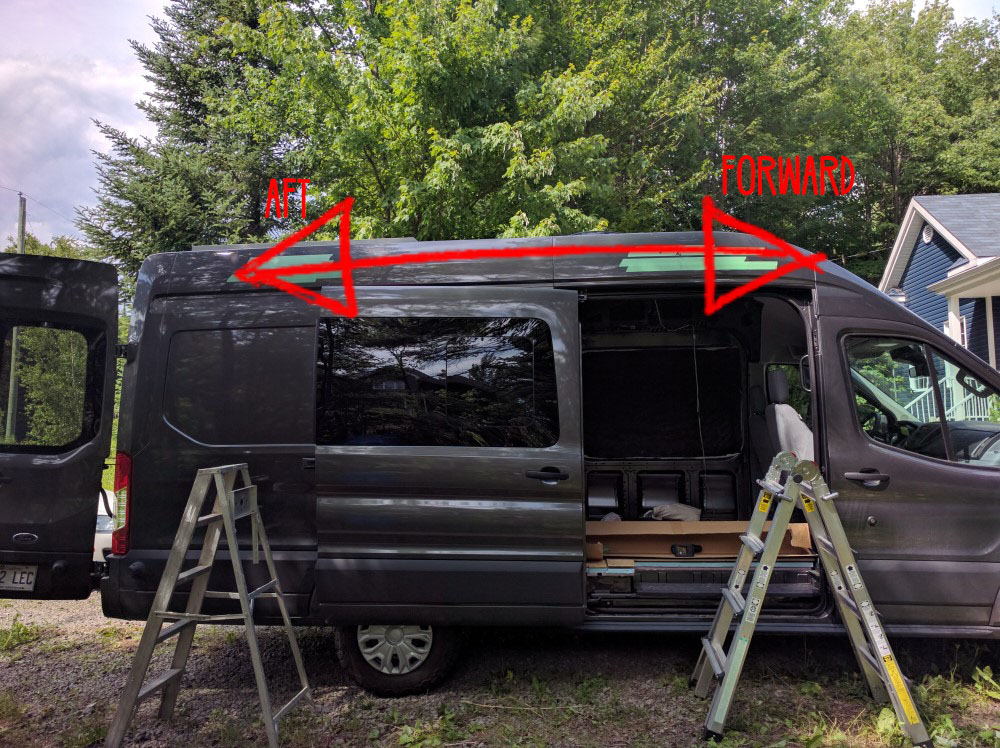 The awning is quite heavy and awkward to work with. So we first located and installed (using only 2 screws) the rear adapter plate (so we don’t have to carry the weight of the awning when we located the forward plate). 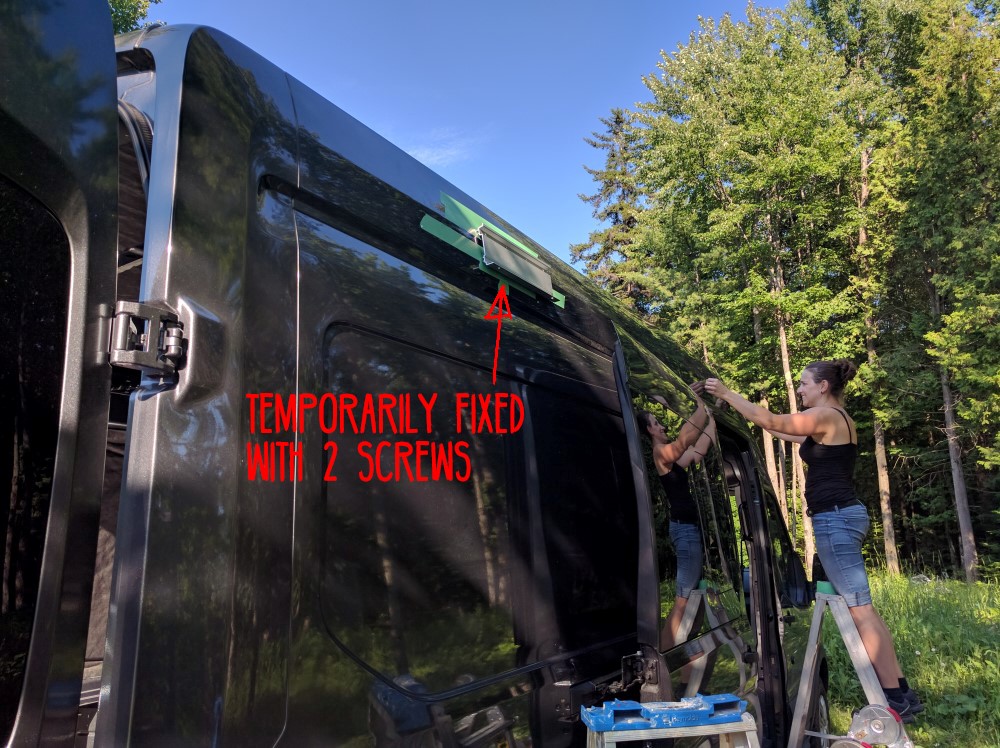 Then we fine-tuned the level of the awning by using mixed techniques (measuring tape, string, eye-leveling) and marked the location of the forward plate. Every people involved had a different opinion. We fought. There was no more rules here.

We fixed the forward plate with only 2 screws and checked the awning fitting on both adapter plates. We ensured the three rules were followed. Nice.

Next, all holes were drilled through the van using the adapter plates as template. As usual to prevent corrosion, primer, paint & clear coat was applied to bare surfaces.

We cleaned the van surfaces with isopropyl alcohol and applied the 3M anti-erosion tape. The tape is actually very strong, so we punctured it at hole locations so the screws would go through.

We found that the mating surface of the Ford Transit adapter plates is not ideal (the surface of the generic kit is fine); to help distribute the load, we fabricated aluminum strips from a 0.062” thick sheet. This should help not to damage the erosion tape in the long run.

We pre-installed the 8 screws and the aluminum strip on the rear adapter plate. To prevent screws from falling, we put painter’s tape (duct tape works better) over the screws head. Then we applied Sikaflex (that’s a polyurethane sealant, as recommended per OEM manual) around the screws shank.

The rear plate was fitted. 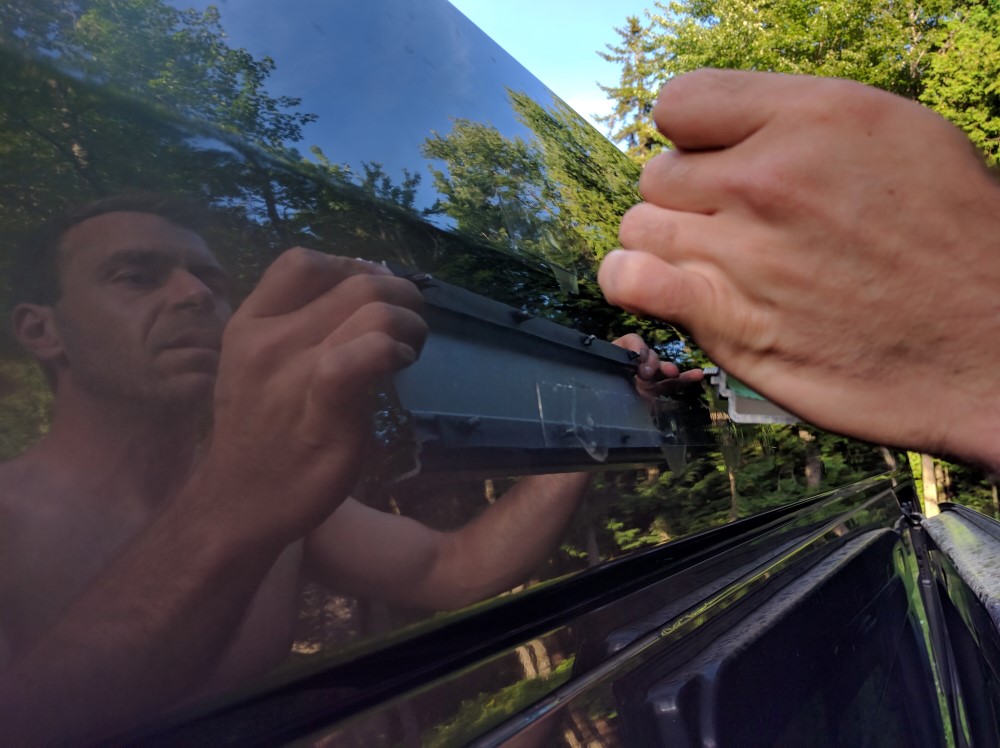 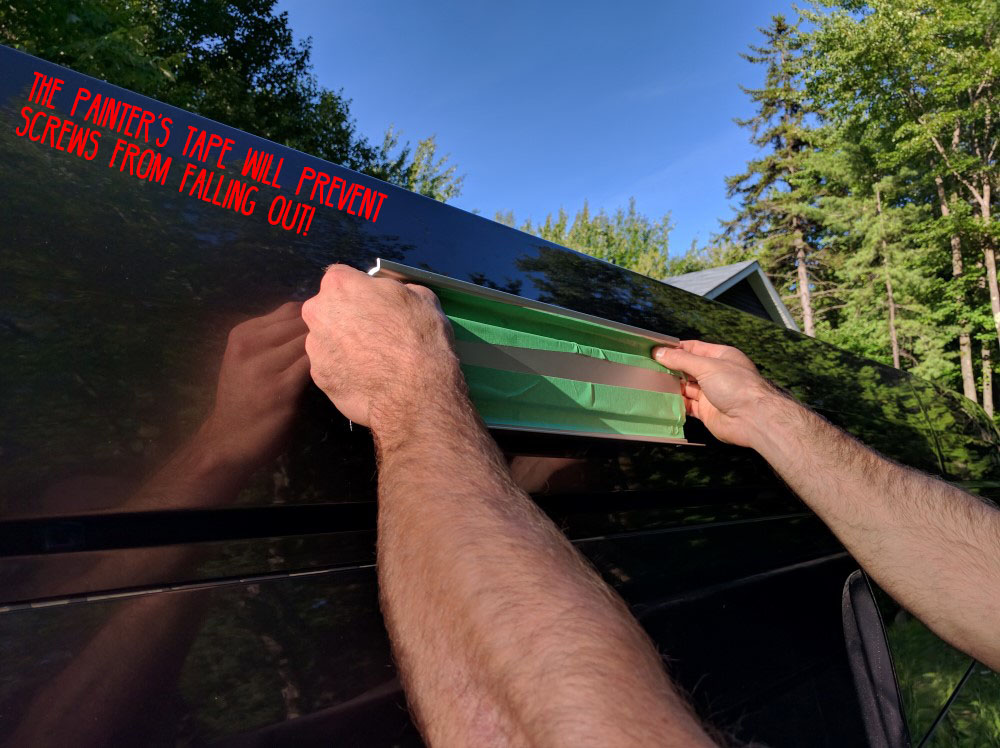 The hardware inside the van is as follows: rubber washer (to protect the van), fender washer (oversized outside diameter for better load distribution), lock washer & nut.

At this point, the rear plate is fixed permanently; minor adjustments are performed on the forward plate in the subsequent steps.

The front adapter plate installation is similar, except the roof as a nice (but unpractical to work with) double-curvature in this area… the surface mating with the 4 screws in the back of the plate is almost flat, but then the surface at 4 forward screws is definitely not flat. We needed to shim the adapter plate somehow. We figured a stack up of washers would do the trick.*

*Technical talk: in a pure shear-type application, increasing the stack up will also increase the moment on the fastener and this might not be acceptable (depending on the context). In our installation, the shear load comes mostly  from the weight of the awning and the 8 screws per plate will provide adequate support. The worst load case is probably the bending moment coming from an opened awning; in this case, the fasteners are mostly tension-loaded or compression-loaded and, we believe, it is acceptable to have such a big washers stack up.

Before sealing permanently (with Sikaflex), make sure to check that the awning will fit on BOTH adapter plates. The awning does not allow to plates to be off: the parallelism and alignment between the two plates must be almost perfect so adjust, check, re-adjust (by adding or removing washer), re-check, until perfect. 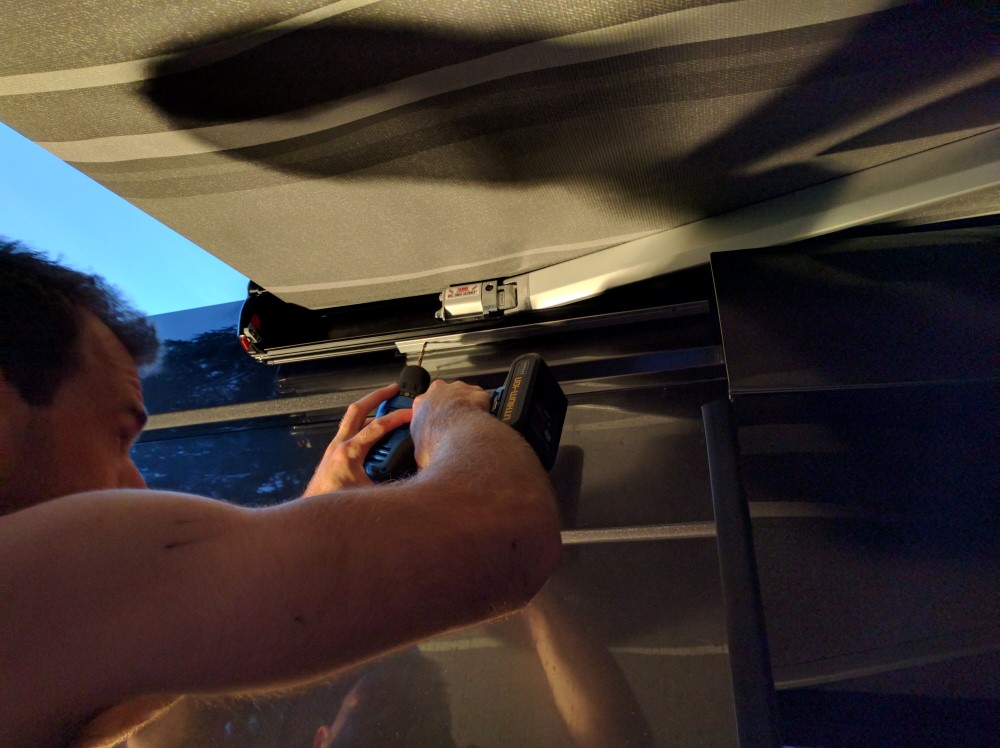 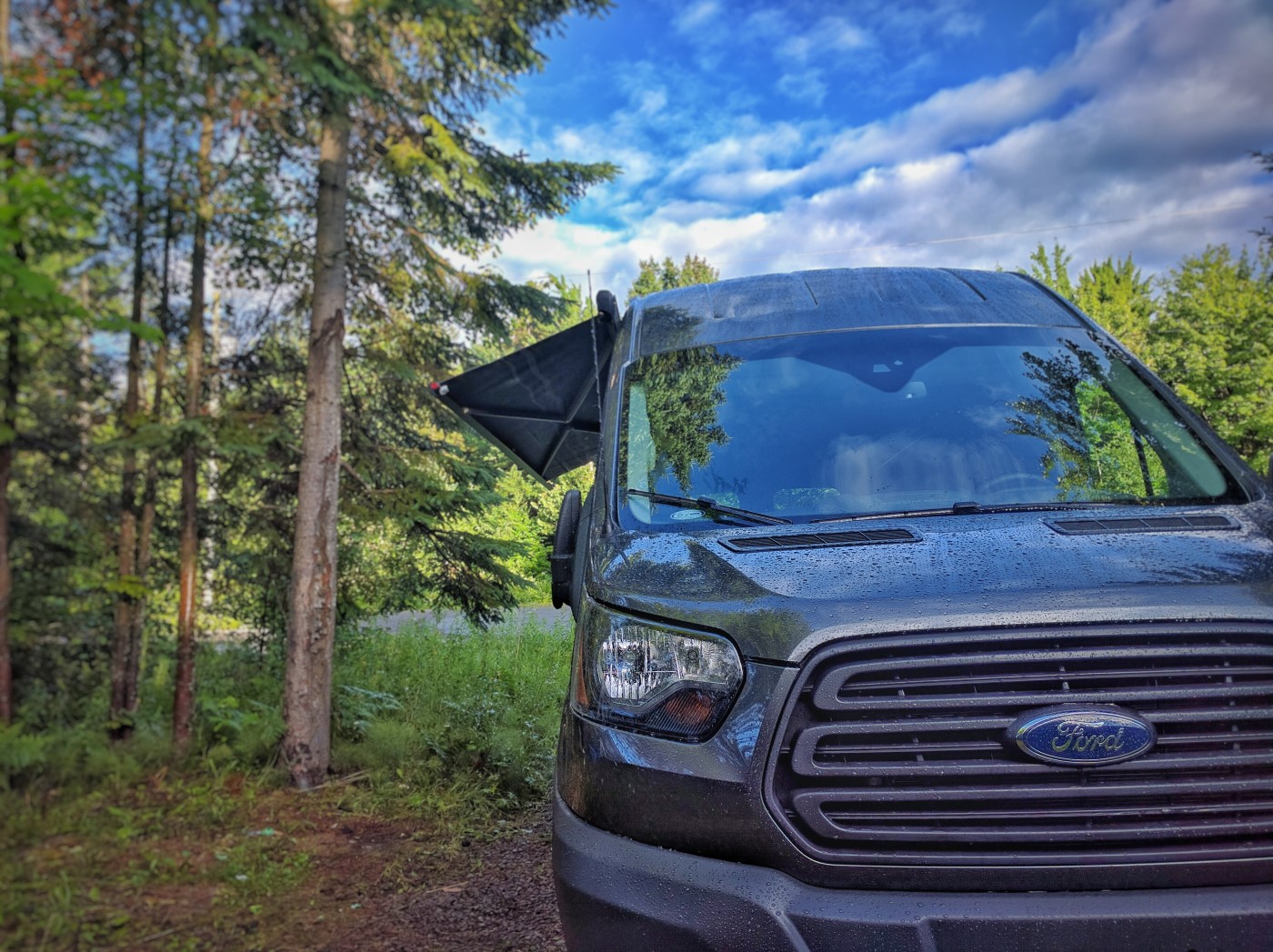 After the installation, we realized that there is a gap between the van and the Fiamma F45S; this gap will allow some rain to go through as opposed to the F65S (which is installed on the roof). No big deal, we will eventually install something to close this gap. We would still choose the F45S over the F65S, but it’s good to be aware of this detail before buying it! 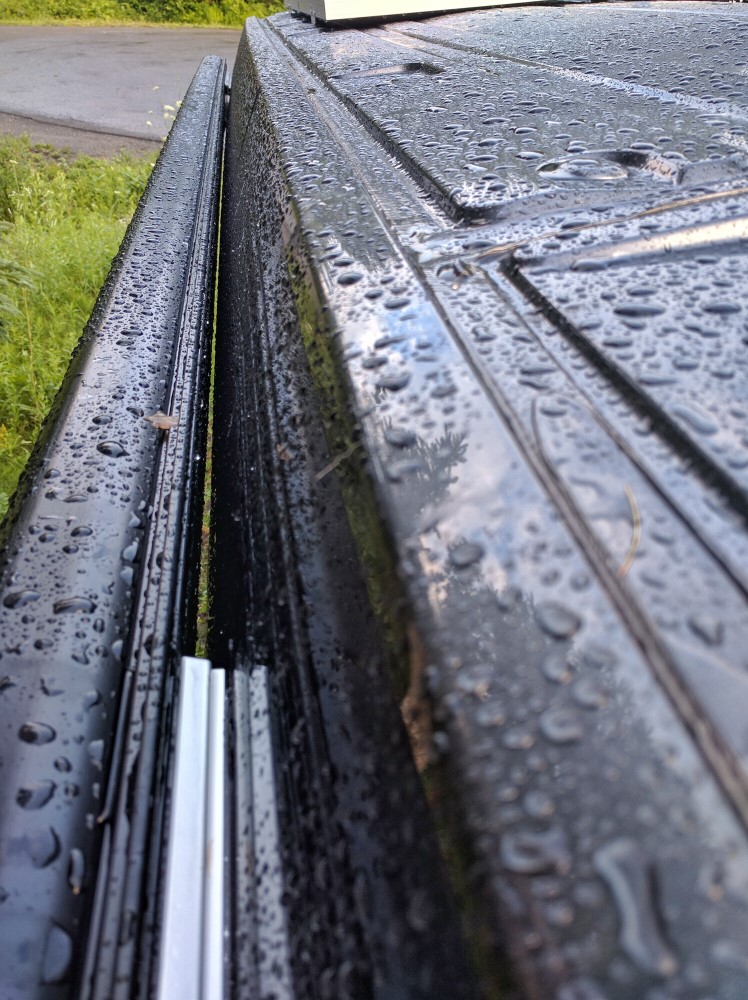 We ordered 4 meters of the Fiamma Rain Guard “L” (9cm width) seal through this eBay Store.

It took less than an hour to install. The seal really snap into the awning, feel very secure and has a “OEM” look.

We got heavy rain and it did what it’s suppose to do, except locally at one place above the sliding door where there is a few drops leaking. Not a big deal, we might add a tiny bit of sealant between the seal and the van to complete the installation. 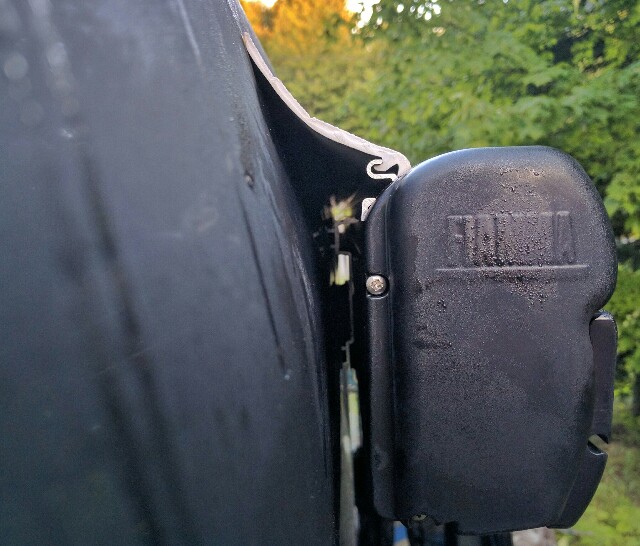 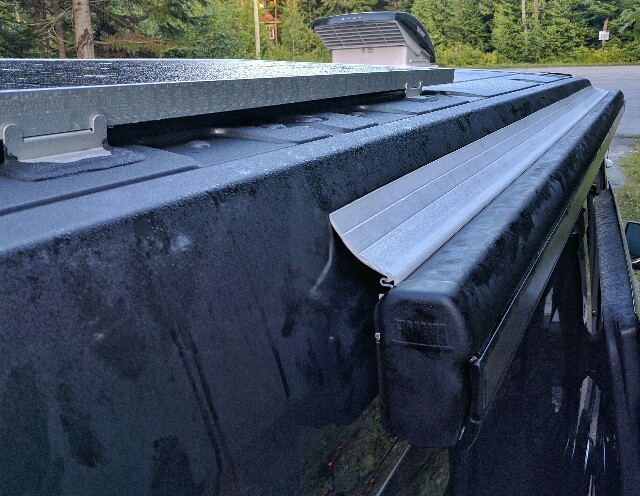 After almost two years on the road, do we think an awning is worth it? In our case, not so much. We used it maybe 10 times total.

We could see it being very useful for:

In other words, it totally depends on your habits!

Check out our Build Journal, learn everything about The Van, read our VanLife Guides, or if you’re new to this start by reading Our Story. 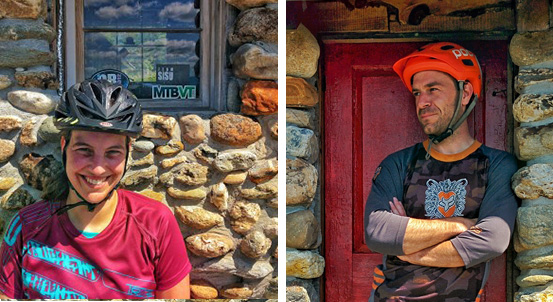 Hello! We’re Isabelle and Antoine 🙂 In 2017 we sold our house (and everything in it), quit our engineering careers and moved into our self built campervan. We’ve been on the road since then and every day is an opportunity for a new adventure; we’re chasing our dreams and hopefully it inspires others to do the same!